7.4 Does the Hypoxic Environment of the Flight Cabin Have Consequences in the Eye?

The rising number of commercial flights means a routine exposure to hypobaric hypoxic conditions by the crew and passengers.

Thus, billions of people fly annually and have to adapt to a hypoxic environment.

Commercial airplanes fly in the troposphere and lower stratosphere, corresponding to an actual altitude of around 40.000ft.1,2

At this high, oxygen partial pressure inspired would be incompatible with life.

Cabin pressurization is a process in which conditioned air is pumped into the cabin of an aircraft, in order to create a safe and comfortable environment to fly at such high altitudes.

Due to both technical and economic reasons, it is not possible to equalize flight cabin pressure to sea level during common commercial flights.

In respect with aviation regulations, flight cabins are pressurized to a value of around 565mmHg (0,74atm), equivalent to be at an altitude equal or inferior to 8.000ft, corresponding to breathing 15,1% oxygen at sea level.3

In a young and healthy adult passenger, flight cabin altitude hypoxia implies an arterial oxygen partial pressure (PaO2) between 53 and 64mmHg, corresponding to a peripheral oxygen saturation (SpO2) of 85-91%.4

The eye physiology at altitude hypoxic environments has been studied although not comprehensively understood.5,6

The Hypoxia Challenge Test (HCT), performed at sea level, creates a normobaric hypoxic environment, by reducing inspired oxygen fraction (FiO2), making it equivalent to the desired study altitude. The HCT is routinely performed to people with lung disease to evaluate their susceptibility to a hypoxic environment, such as a long-haul flight.4,7

Our research group has designed a pilot study in healthy volunteers to define the physiologic retinal vascular response under hypoxia conditions using OCT-A, in collaboration with the respiratory medicine department in our hospital.

A total of 30 volunteers (14 women) were included and submitted to the HCT and having performed the OCT-Angiography examination at three timepoints: 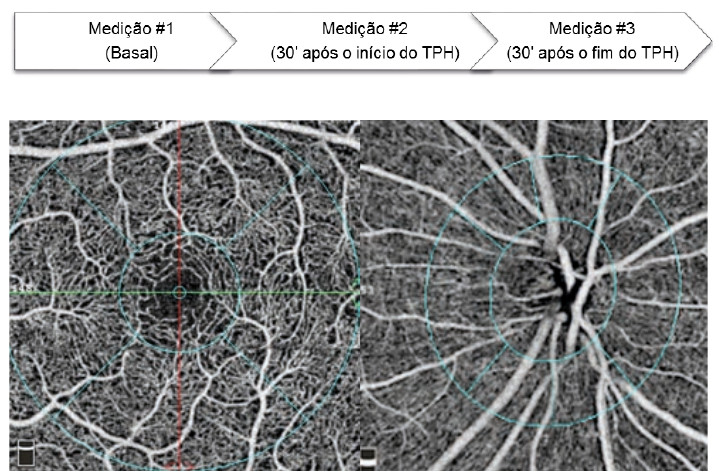 Of the results obtained it should be highlighted the statistically significant increase in peripapillary and parafoveal vessel densities (figs 2 and 3). In resting conditions, after HCT, the vessel density decreased to near-baseline values.

changes in retinal microvasculature in mild hypoxia conditions, such as the one normally encountered in the flight cabins.

The experimental results obtained reproduced the ones from other studies in hypoxic environments, in which a physiologic vasodilation aan nd increase in blood flow were reported.5

As such, we believe both HCT and OCT-A may be helpful in the future to better understathe nd retinal vascular response a to stimulus such as the decrease in oxygen, and also, with more clinical implications, of changes of this response in ocular disease states.

For flight cabin hypoxic studies, the gold standard methods is the hypobaric chamber, which due to its complexity and dimension makes its use challenging in clinical studies. HCT does not reproduce the changes in intracavitary volume neither induces nitrogen release from the tissues as in the hypobaric chamber.

The evaluation of the changes under hypoxia was performed at a single timepoint (30 minutes after HCT start), according to the BTS protocol. However, it is not known if this effect is kept for longer periods of hypoxia such as the majority of journeys by air.

Also, the vessel density analysis was automatically obtained from the built-in software of the OCT-A device, which deserves a better characterization in terms of reliability and repeatability. The artifacts inherent to this new technology should also be considered.10

In Ergophthalmology, other consequence to the eye should also be considered (e.g. ocular surface changes, intraocular pressure,…), which were not the purpose of the current study.11