7.3 Can We Use Multifocal Iols in the Military? Glasses Independency Vs Visual Quality

Glasses independency and contact lenses use are particularly appealing in the military personnel, especially when we consider the combat setting or intense physical activity.

Glasses are not compatible with current weaponry systems that require headgear, such as night vision goggles and helmet-mounted targeting devices.

Problems related to glasses include restricted peripheral vision, fogging, incompatibility with diving/swimming and the possibility of displacement during positive acceleration (+Gz).

Contact lenses, although can offer some advantages, can also lead to several operational problems.

Soft contact lenses intolerance can compromise its usefulness in dusty, hot or moist environments and are also incompatible with chemical/biological headgear.

Furthermore, routine contact lenses hygiene or its replacement is often impractical or impossible during field operations, and so military often don’t use them or end up extending its wear pattern with an additional risk of complications.

Cataract is a common clinical condition that compromises visual quality and affects 36 million people in the western world.

The implantation of a monofocal intraocular lens (IOL) following the surgical removal of the cataract by phacoemulsification is the standard of care.

The development of multifocal IOLs (MIOLs) in the eighties offered the possibility of spectacles independency after cataract removal or clear lens extraction.

In the last few years, these lenses have undergone major improvements with the development of several alternatives that allow the correction of multiple working distances.

Figure 1 shows mean visual acuity for different distances in a study group that we evaluated with various types of MIOLs.1. 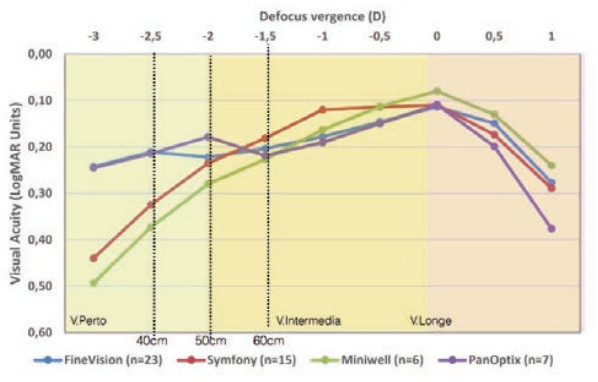 However, this type of lenses is associated to some limitations.

On one hand, dysphotopsia, like halos and glare, and on the other hand a reduced contrast sensitivity, especially in mesopic conditions, when comparing with monofocal aspheric IOLs.

These dysphotopsias can be partially compensated by binocular summation, which reduces the light distortion index in cases of MIOLs and that we have already characterized in our patients (Fig. 2).

Moreover, the evaluation of our patients has shown that mechanisms such as binocular summation and neuroadaptation contribute to an overall reduction in dysphotic phenomena and for the improvement in contrast sensitivity over the first six months after MIOLs implantation (Fig. 3 and 4).

The postoperative follow-up of these patients will allow a better understanding and characterization of these phenomena and enable us to continue to improve our corrective ability. 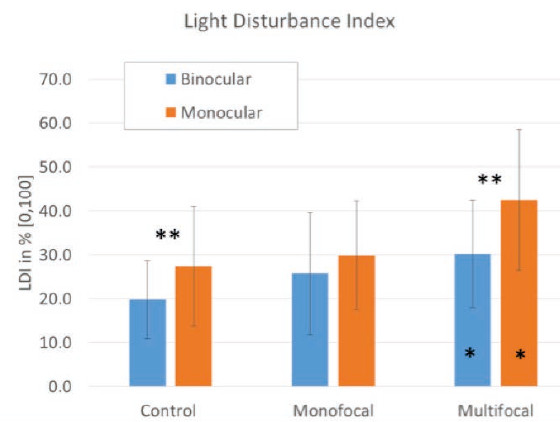 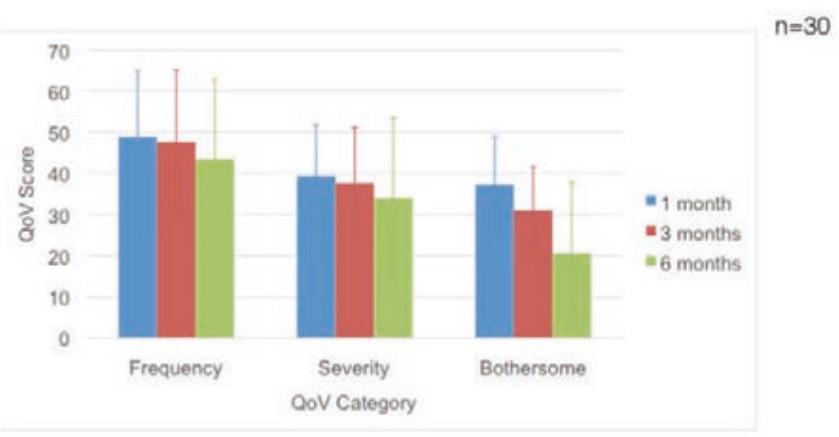 Fig. 3 – Short and Medium-term adaptation to the dysphotic phenomena after MIOLs implantation. Quality of Vision score evaluation (dysphotopsia frequency, severity and degree of bothersome) 1, 3 and 6 months after surgery.

Cataract surgery and clear lens extraction are rare procedures before the age of 40-45, so it’s not common the possibility of any of these surgeries in armed forces candidates.

However, the possibility of this type of IOL implantation is an increasingly frequent scenery in active military personnel and its discussion is a present and relevant issue due to the tight requisites of visual performance that are required to this population, and due to the theoretical advantages that this refractive solution can offer.

It is useful to distinguish two groups of individuals: the ones belonging to the general military service and pilots since the visual performance requirements are frequently more demanding in the latter group.

The Portuguese “General Inaptitude and Incapacity Tables for Armed Forces service”, published in Diario da Republica (Ordinance 1157/2000), that collects the conditions for a candidate’s inaptitude, are absent regarding previous refractive procedures, as well as contrast or glare sensitivity evaluation.

In Portugal, and in most country members, MIOLs implantation is not allowed in General Military Service.

However, Spain, US, and Germany already allow this type of lens implantation in military personnel, and Denmark has a “case-by-case” decision policy for the use of these devices.

Pilots during flight have to constantly use different reading distances in several positions and variolightinging conditions.

Far vision is essential to control what’s happening outside the cockpit but intermediate and near vision are fundamental to control the multiple displays and instruments at different distances in the frontal, inferior and superior dashboards and also the written and printed material that may have to be consulted during the flight (Fig. 5).

Therefore, presbyopia represents an additional challenge for the pilots and solutions such as multifocal contact lenses, monovision or monofocal glasses are usually not allowed by aviation regulating authorities.

Glasses with progressive lenses are allowed, but usually require adaptations for reading the instruments and displays in the superior dashboard.

After cataract surgery, although monofocal lenses offer an excellent far visual acuity, they don’t allow all the working distances that are necessary to the pilots, and so it’s indispensable the use of optical correction with the already mentioned limitations. 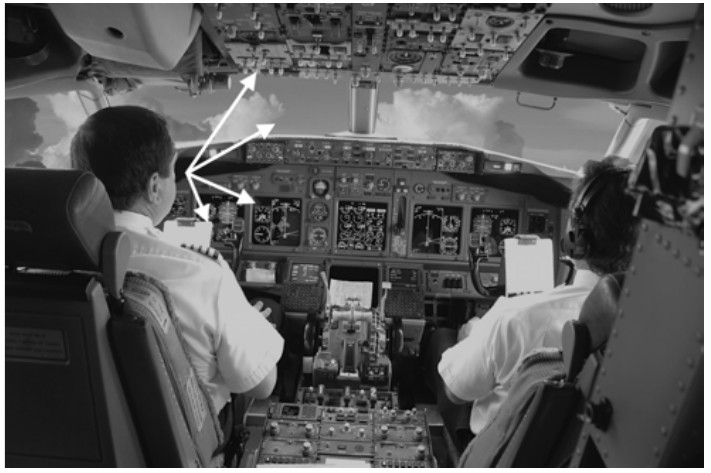 However, in a flight environment, we must also consider several factors that can significantly compromise visual performance: pilots are subject to low levels of lightning but simultaneously to high-intensity lights that can lead to glare and “low visual acuity”.

Altitude affects the quality and quantity of electromagnetic radiation that the crew is subject to. In the flight above the clouds, solar light is reflected upwards.

This reverse light distribution leaves the dashboard in the shadows, while the outside is very bright.

Besides that, the mild hypoxia that exists, even in a pressurized cabin, can affect dark adaptation, constrict visual fields, reduce visual acuity and cause a slight increase in intra-ocular pressure.

We must also consider the cabin’s low humidity environment that can lead do dryness of the ocular surface and consequently affect visual quality.

In OTAN Technical Repot it’s already stated that MIOLs implantation is not allowed in air force pilots in most country members, including Portugal, except Spain and Belgium, that only don’t allow it in pilot candidates.

Likewise, in civil aviation, there are current regulations regarding visual requisites after refractive surgery.

The International Civil Aviation Organization (ICAO) Medicine Handbook points the main risks of this type of surgery from the aviation point of view: loss of best corrected visual acuity, visual acuity fluctuations during the day, dysphotopsia, such as halos, glare or starburst and loss of contrast sensitivity.

In Europe, the European Aviation Safety Agency  (EASA) in its regulation about pilots and air controllers medical certification,6,7, by which ANAC (National Institute of Civil Aviation) guides itself in Portugal, states that certification is possible 2 months after cataract surgery if visual requisites are fulfilled and if a monofocal IOL or non-colored contact lens was used.

This means that MIOLs are not allowed to these professionals.

The post-operative certification of the crew requires a minimum period of 3 months after surgery and a medical report that guarantees no operative complications, a stable refraction and the absence of glare, flare or other visual phenomena that could affect visual performance and impact aviation safety.

Nonetheless, the American Air Force in its 2012 guidelines forbids the use of MIOLs and accommodative IOLs.

Multifocal intraocular lenses can be an efficient tool to overcome the limitations that uncorrected refractive errors and presbyopia bring to the daily life of military personnel and pilots.

In some countries, the use of this kind of lenses is already authorized even in pilots.

Although in Portugal, current regulations don’t allow the use of these devices in civil aviation pilots, it is possible, due to the recent technological developments and updated data on contrast sensitivity and dysphotic phenomena, that these recommendations will be reviewed.

The same happened with corneal refractive surgery since glasses independence is also a very favorable element to this professional activity.