4.4 Do We Need Filters in Computer Screens?

The prevention and treatment of Computer Vision Syndrome or Digital Asthenopia (DA) requires an ergophthalmological approach, due to the various factors that are involved in this syndrome, that should include eye protection and workplace environment appropriateness.

Regarding workplace environmental factors, two factors should be distinguished: the illumination from the environment, that when inappropriate can cause glare and indirect reflections on the computer screen, and the characteristics of the computer screens, that can cause glare, direct reflections and flicker, as well as greater degrees of visual fatigue, depending on the type of screen and the emission of radiation.1

Depending on the impact of these factors, the use of screen filters may be considered.

The balance between computer screen light and ambient light is a key factor to be considered in the appropriateness of the workplace environment, as an erroneous distribution of illuminance in the visual field can cause glare and visual fatigue.1-3

However, some studies have shown that these filters do not reduce the symptoms of asthenopia significantly and its use as an effective solution for the treatment of DA is controversial. Therefore screen filters are a contributing aspect that should be considered along with other factors that are implied in DA such as changes in accommodation and ocular dryness.1,2,5

According to most authors, screen filters appear to have a greater impact on people with greater sensitivity to glare and reflexes and those whose symptom’s relief was insufficient with other ergonomic measures (such as controlling the amount of artificial light sources in the vicinity as well as controlling the amount of natural light, through the use of window blinds, for example).2

Therefore, this type of filters are important as a complement to other ergophthalmological measures.3,4

As previously mentioned, the type of screen is also a factor to be considered, with two main relevant groups: Cathode Ray Tube (CRT) screens, which are present in most of older desktop computers and are bulky monitors with high-power consumption; and LCD screens, that are present in all laptops, smartphones, digital cameras and most of the newer desktop computers, using less electrical power.

CRT screens are considered less safe due to the greater amount of used electrical power and are the screen type most often associated with DA:

- In CRT screens the image produced involves a series of processes, including the front of the tube that is scanned inferiorly into a pattern of lines, "scanning" of the image on the screen, a coil of magnetic field generation, among others. Each point of the visual area is individually illuminated, that is, light and image creation are directly related, and the higher frequency of the DA is associated with the low rate of image refreshing, causing an effect named flickering. The screen refresh rate represents the number of times per minute (measured in frequency, Hz) that the screen is repainted to produce an image. The flickering effect consists of an almost unnoticeable oscillation, but which causes rapid visual fatigue, while fixating an image on the screen. Thus, increasing the refresh rate of the screen may contribute to the reduction of DA symptoms, with a minimum recommended refresh rate of 75 Hz. This threshold is supported by the study of Berman et al that evaluated the responses of the human electroretinogram (ERG), showing that a synchronous ERG response occurs with stimuli above this frequency rate.5,6

- On LCD screens the image is formed directly on the screen, without the need for a tube, resulting in thin and flat screens. These are filled with liquid crystals, which are illuminated by a backlight or reflector. A special fluorescent lamp illuminates uniformly the screen. The refresh rate of this lamp is around 200 Hz in general, minimizing the flickering effect, and therefore the incidence of the DA. 5,6 Ziefle has published a study comparing CRT and LCD screens with respect to the search time (in milliseconds per line), the fixation time (the time that the eyes need to extract information) and the fixation frequency (the number of fixation movements per line). This study has shown that LCD screens superior to CRT screens in the three studied parameters, representing an important advance in screen technology, optimizing work productivity and minimizing visual effort.5,7

On the other hand, in recent years there has been an increase in the use of LED technology (Light Emitting Diodes). It consists in a high energy radiation source within of the visible light spectrum (380 to 530 nm) and is currently replacing conventional illumination, being widely used in light emitting devices such as light bulbs and the latest television, computer and most smartphone screens. The exponential use of this type of technology is linked to the European directives of Eco-design of Energy Using Products (2005/32 / CE), which recommends replacing incandescent bulbs with more economical devices like LEDs, with the aim of saving energy.8-10

However, the use of LED technology has been the subject of some more recent studies that address possible harmful effects on health, namely the following:

- Possible association of the blue component of white LED light with retinal toxicity (contributing factor in the pathogenesis of age-related macular degeneration and retinitis pigmentosa, based on oxidative stress and inflammation triggered by the emission of this type of radiation).
This effect may have a greater impact with a longer exposure time to the screens (some studies report effects from 6 to 9 hours of exposure) and with a lower distance to the screen. Until now, only studies on animal models have been carried out and further research may contribute to a better understanding of this effect.8-10

- Possible association to a novel increase in exposure to the flickering effect, and consequent increased risk of DA due to a longer duration of exposure to the screens. The blue light component may play a role in this effect.8-10

No alpha, beta or gamma radiation emission occurs, with X-ray emission occurring at low levels and being virtually all contained in the screen.5

Several studies on the emission of ultraviolet A and B (UVA and UVB) radiation have concluded that the screens of commonly used electronic devices do not emit ultraviolet radiation at levels that represent a health risk, highlighting the absence of UVA emission - 320-400 nm - and studies that have detected the emission of UVB, refer to its emission in the 280 nm spectrum (not in the 290-320 nm spectrum).5,11

One of the most studied health effects has been the impact of emitted radiation from the screens on pregnancy, with most of the more recent studies showing that there is no increased risk of miscarriage.12,13

Regarding overall harmful effects of radiation, several studies have shown that there is no evidence to support the existence of harmful exposure to radiation or exposure to electrical fields, magnetic or ionizing radiation at levels above ambient levels.5,11,14

The use of screen filters in this context, as a way to reduce the electrical field around the computer is not clearly established: according to a study of Oftedal et al, its use did not allow a significant reduction in the severity of visual symptoms and, according to the literature review of Kirsner and Federman, the existing data are inconsistent or have some methodological flaws, thus highlighting the need for further research in this area.14,15

Among the most recent topics in this subject is the role of blue light radiation, the most potent radiation in the visible light spectrum (380-500 nm).

It has been the subject of several research studies, and its impact on health is not yet clearly defined. The main studied effects include symptoms compatible with DA, retinal injury as previously mentioned, headache, insomnia and depression. 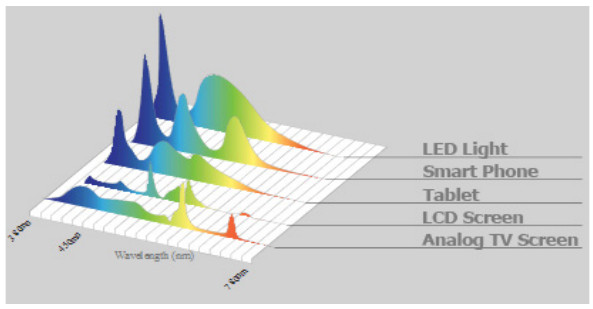 Fig. 1 – Comparison of the blue light radiation between devices.16

Concern about its effects on health arose from the progressive increase in the use of electronic devices that have higher rates of blue light emission, namely television and computer screens with LED technology, all smartphone screens, as well as LED light bulbs. In this context, some authors suggest using blue light filters in screens, filtering glasses for harmful blue light and/or using software specifically designed to regulate the amount of blue light to which the computer user is exposed throughout the day (a special measure to reduce the impact on the circadian rhythm, by minimizing the occurrence of insomnia).

This option seems to be more relevant in people who use computers, or other electronical devices abovementioned, frequently and for longer periods of time and / or those who are more sensitive to blue light.16-18

In conclusion ... Do we need filters on computer screens?

The need for filters should be integrated in a multidisciplinary and individualized approach to AD.

The widespread use of filters on screens is not clearly established, because on one hand there is some controversy between studies and on the other hand some types of filters are still recent, as is the case of blue light filters.

Further studies are needed on the effects and specific characteristics of the different types of filters, and an individual approach is recommended, with its use as a complement to other ergophthalmological measures.